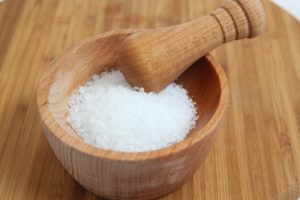 Salt has long been used throughout history as a treatment for respiratory illnesses by great doctors such as Hippocrates[1] (460 – 370 BCE) but does it raise blood pressure?

Some studies show that it does in fact raise blood pressure but others show that it only effects a small percentage of people. I did a case report by measuring my blood pressure over about six days while increasing salt intake and found that it does not raise my blood pressure.[2] Now you might think that I’m going to go polish off a gallon of pickles, a bag of pretzels, and a jar of olives, well I’m not. Why? Because a high intake for salt has been linked to stomach cancer but a small amount of salt has been shown to improve health.

Most published epidemiological studies provide positive evidence for an association between salt or salted food consumption and stomach cancer risk, which was also supported by experimental studies. [3]

Sodium intake was associated with cardiovascular disease and strokes only in communities where mean intake was greater than 5 g/day [5000 mg]. A strategy of sodium reduction in these communities and countries but not in others might be appropriate.[5, 6]

So a small amount of sodium improves health in the majority of the population and too much may cause cardiovascular events and death. Now the question becomes what were they eating? The study was done on people that live in many countries around the world. We can make the assumption that the majority of the people in this study were eating the western diet. This is a diet high in animal products like meat, eggs, dairy and processed foods like chips and cookies. Increased potassium intake reduces sodium.[6] Had this study been done on a group of whole food plant-based individuals it would have most likely resulted in much less risk of cardiovascular events and death because of the increased potassium in the diet.

Humans consume a wide range of sodium from less than 250 mg/day to over 30,000 mg/day. For example, a sodium intake of about 200 mg daily has been documented in the Yanomamo Indians living in the Amazon Basin of Brazil.[7]

Early humans didn’t eat a high salt diet they ate mostly plants. Which is a much healthier diet than most Americans follow. Low sodium of about 200mg – 1000mg is what we are adapted to intake but the human body can handle much more. For a small minority of people salt may cause swelling or water retention.[8]

Salt intake is not really the problem though. It is the company salt keeps. Animal products such as milk, cheese, eggs, ham, chicken, beef, and fish are high in salt but are also high in fat and protein which both contribute to fat gain. Processed foods such a doughnuts, pie, cake, cookies, and ice cream have added salt and are also high in fat. Eat fat and animal protein and watch your buttocks and belly grow.

High salt intake of 5000 mg or less does not raise blood pressure in the majority of the population.[5,6] High salt intake and high blood pressure are markers for an unhealthy diet. Blood pressure medicines and cholesterol medicines only improve the marker they do not reduce risk of cardiovascular events or death. Drugs and supplements do not address the underlying cause of the problem which is an unhealthy diet high in animal products and processed foods.